First of all, my apologies to Hephaestion and all of you.  I have had a lot of life drama in the last 6 months that, I am ashamed to say, has caused me to kick my Hephaestion book to the side.  Happily, I find myself in a place where I can not only restart the project but also operating with a new found inspiration for the project.

I don't know if it was the spirit of Hephaestion himself, the Muses, or Apollo, but I have finally been able to decide exactly how I wish to examine Hephaestion's importance and exactly how to explain why he is so underrated.

In the course of my research so far, I have found that many have scoffed at Hephaestion for what they believe to be his lack of skills as a soldier.  They point to the fact that Alexander almost exclusively used Hephaestion for diplomatic or logistical duties rather than those related to battle.  Looking at Alexander as strictly a conqueror leading an army of crack soldiers, they compare Hephaestion to fellow officers like Craterus, Perdiccas, Parmenion, and even Ptolemy Lagides who distinguished themselves on the battlefield and sneer at Hephaestion's supposed lack of soldierly skill.  They accuse Alexander of favoritism in his raising of Hephaestion who supposedly earned nothing by merit.

I disagree wholeheartedly with this view.  I would counter that it is this very skill at logistics and diplomacy that sets Hephaestion above the others.  As history has shown, generals and soldiers able to conquer an empire are not rare by any means.  While I support that Alexander excelled above all others in this area, there have been empires formed throughout history--Roman, Mongolian, Persian, Egyptian, British, Spanish, etc.  What is far more rare are conquerors who can maintain those empires after conquering.  This is where Hephaestion rises above the crowd.

Alexander, a man who had conquered most of the known world and had ambitions to create an more integrated society such as the world had never seen before, turned repeatedly to one man, and one man alone, to help achieve this goal, Hephaestion.  An empire, as well as an army, can only survive if its people are fed, clothed, housed and allowed a degree of autonomy in moral matters.  Lack of any of these causes dissent; dissent breeds instabililty; instability destroys empires.  Hephaestion was trusted time and time again with duties such as establishing and maintaining supply lines to feed several hundred thousand soldiers and their hangers on across thousands of miles, building new towns worthy of settlement in often hostile environmental conditions, important diplomatic missions such as the choosing of new client kings, and even solo commands such as he had in India when Alexander routinely split his forces into thirds.

I know I talk to a lot of Alexander scholars and Hephaesto-Echelon.  This book is a labor of love and I wish to make it as perfect as possible.  Any thoughts, ideas, and arguments are most welcome.
Posted by Jen at 11:29 AM 2 comments:

Alexander the Great and Lord of the Rings

So I've recently been reading Tolkien's Lord of the Rings for the first time at the suggestion of a good friend.  It may be that I can find the Alexander in anything, no matter how mundane and seemingly not related, but I see some parallels between Frodo's quest and Alexander's life.

Frodo is sent on a quest inherited from an older relative--he must destroy a ring found by his uncle Bilbo.  Alexander somewhat inherited his invasion of Persia from his father Philip, though Alexander's vision for that invasion went far beyond Philip's.

Frodo must destroy a power that threatens to rule the world and to right great wrongs done in the past.  He must destroy a ring created by an evil power to enslave all the diverse peoples of Middle Earth.  In destroying it, he must right a past wrong committed by Isildur and his heirs.  Alexander left Macedonia and Greece behind to destroy the Persian Empire, the largest empire in the world at his time, an empire that had "enslaved" numerous peoples under its power.  He also set out to avenge great wrongs done to the temples of Greece as well as failed Greek attempts to overthrow the power of Persia.

But perhaps the greatest paralells I see are in the relationship of Frodo and Sam and Alexander and Hephaestion.  Though Frodo was the chosen Ring Bearer and was ultimately responsible for the outcome of the quest, he would not have been successful had it not been for friends, especially Sam.  It is Sam who puts all thought of himself, his safety, even his own life to the side to ensure that Frodo's quest is successful.  While I will never deny that Alexander achieved great things, I truly believe that what he accomplished was in large part due to Hephaestion's unfailing support and sacrifices.  Hephaestion set all his personal goals and needs aside for Alexander.  His life became about doing whatever he could to ensure that Alexander's desires came to fruition and his needs were met.  It was a committment that would cost Hephaestion everything in the end.

Anyway, just a few thoughts I've been kicking around.  I told you all that this Hephaestion book was never far from my mind!
Posted by Jen at 12:01 AM 3 comments:

So now that I'm sure that you all think I have died or dropped off the face of the planet or some such event, I thought I would take some time to give you all a much overdue update on my current projects.  Some insane personal things have gotten me somewhat off track in the past few months I am ashamed to admit.  However, I should be back on track now.

First off, the Hephaestion book is still very much in the works.  Though I haven't necessarily had the time or ability to sit down and research lately, the topic is never out of my mind.  Ideas and thoughts are constantly churning away and, as Ptollers will attest, Hephaestion constantly crops up in my tweets! Now that I do have time to sit down and research, I'm plotting out some definite plans.  Dr. Reams' dissertation on Hephaestion was a wonderful secondary resource.  I am in the process of going back and reading it while notating the most salient points.  Her take on Hephaestion shares similarities with my mine but a few differences.  As far as primary sources, I am beginning with Arrian as his work, according to current consensus, is the most balanced ancient source available.  What I wouldn't give for a copy of Ptolemy Lagides' or Aristobulus' diary though!

Secondly, a new project is in the works.  Several months ago, I was introduced to the game-changing work of an Serbian-born, Australian-bred, transgender model named Andrej Pejic.  I highly recommend acquainting yourself with him and his work if you are not already so.  This person is turning the fashion world upside down by presenting a completely new and unique "picture" of what it means to be man/woman/human.  I am fascinated by the way clothing is used as nonverbal communication.  Andrej blows all preconceived notions of what a man or woman should "look" like and turns traditional gender roles on their heads.  So, a work examining how clothing, especially specific articles of clothing, have been used throughout history to create the image of "man" and "woman" with Andrej's work as the glass through which these ideas are viewed.  For those of you unfamiliar with Andrej Pejic, I'm enclosing a pics below.  The first is just a basic shot of Andrej that I happen to find interesting.  The second is from a photo shoot which used the androgyny by picturing Andrej as in both "male" and "female" roles in each picture. 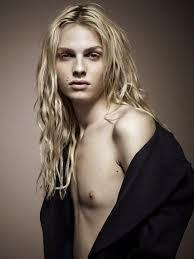 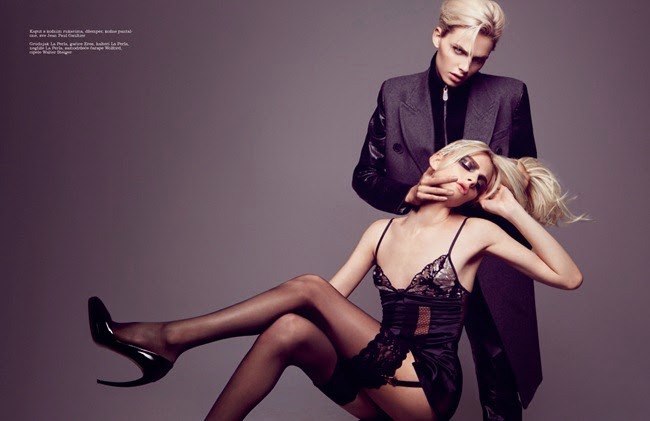 Lastly, there is the question of school.  I was supposed to begin a distance-learning program in Classics as the next step to getting that Classics PhD (as all academics know, it's not about what you know but what piece of parchment you can whip out), but the recent craziness has forced me to postpone this.  I guess I will have to keep studying on my own with the fear of making Hephaestion ashamed as motivator instead of grades.

This is what's in the works for those of you playing the home game.  As always, feel free to comment and question.
Posted by Jen at 11:29 PM No comments: