A while back, one of you asked me what it was about Sergei Polunin and his story that I found so fascinating.  I wanted to answer the question completely and rightly.  My apologies, Cassidy, that it has taken so long for me to get around to answering.

I first discovered Sergei Polunin while watching the Phantom of the Opera 25th Anniversary concert that took place at the Royal Albert Hall in London in 2011.  He was performing the role of the Slave Master in the opening ballet.  Even though it was a relatively minor part, he stood out amongst all the others on the stage.  His athletic ability is easily seen, and when they showed the close-up of his face, I was forever under his spell.

I immediately looked up his name in the credits and, as we all do when confronted with new knowledge, went immediately to Wikipedia to find out all that I could.

Sergei Polunin is a Ukranian ballet dancer, though not by his choice.  As he was growing up in the Ukraine, his mother felt there were only two choices for him to have a successful life: gymnastics or ballet.  She started Sergei in gymnastics at a very young age.  He studied until an illness sidelined him and left him behind his fellow classmates.  He then switched to ballet where he quickly established himself as an unparalleled talent.  It seems that Sergei had a natural aptitude for ballet rarely seen.  His physical ability allowed him to progress rapidly until he left all those around him far behind becoming a prodigy at a young age.  He was sent to England to study and by the age of 19 was named the youngest principle dancer ever for the Royal Ballet in London.  He had a life that millions of young dancers everywhere could only dream of.  He had a life he had not chosen.  He found himself trapped in a gilded cage.  Like any caged bird, he began to fight against his bonds longing for a freedom that seemed beyond his grasp.  He only found release in dancing, but it was dancing that was keeping him trapped.  It was the very talent within him that made him so in demand, yet that very talent that was slowly killing him.  There were rumors of drugs.  Of late night partying.  Of desperate unhappiness.  Until one day, he quit.  He walked in, hours before a show, and simply said, "Enough".  He was eviscerated in the press.  They called him spoiled.  They called him childish.  They called him a devil.  They called him the bad boy of ballet.  They called him irresponsible.

Finally, it reached a point where he decided he would do one more dance, then never dance again.  Out of that, came this video.

This took my breath away.  I fell in love with Sergei all over again.  Throughout out the dance, I could see him fighting, fighting against all the demons that had plagued him through the years.  Fighting against the very talent that allowed him to do the amazing things I was watching.  It seemed to be not just a ballet, but Sergei's life in visual form.

Thankfully, this video quickly went viral.  Through it, millions of people around the world fell in love with Sergei as I had.  Perhaps best of all, the admiration and love this video spawned inspired Sergei to not leave dance.  It renewed his spirit and launched several projects that will keep him dancing for quite some time.  And in the past year, he has found love with a fellow Russian ballet dancer who has increased his love for ballet even more.

So that is Sergei's story in a very short version.  Why do I find it so compelling?  I have always had a deep love for beauty, but not the traditional ideas of beauty.  I am enthralled by beauty that is haunted.  I've shared this picture in other places, but I will use it here again as a visual example. 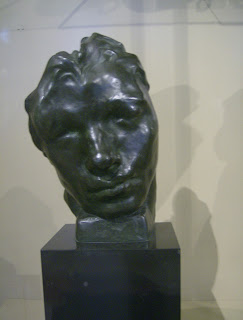 So this is Glyn Philpot's Mask of a Dying Faun.  Why does this appeal to me?  It is the perfect example of beauty.  It is a gorgeous face, well-formed, strong, proud, with a touch of androgyny.  But it is not a happy face.  In its lines and planes, you see great sadness, introspection, and weariness as if the ugliness of the world weighs heavily on his shoulders.  It is a beauty that is perfect because it has risen above that very ugliness.  It has been touched but not overcome.  This is what I see when Sergei dances.

I encourage you all to use Google to explore Sergei and his career.  Watch him dance.  Read interviews so you can learn about him in his own words.  Let him bring beauty into your world.  And as always all comments and discussion are welcome.  I hope you all fall in love as I have.